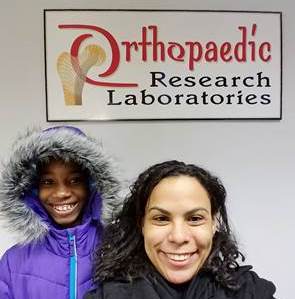 Big Sister Nizeet Aguilar Sets Up Unique Opportunity for Little
Nizeet and Alexia, who were matched in June of 2016, have had a lot of fun since they’ve met, and Nizeet recently shared this story with us. “Alexia has told me before that she wants to become a medical doctor when she grows up, so I thought it would be a good idea to meet with someone who is in the process to become a medical doctor. We met for lunch with Arielle, a first year medical student at Indiana University. We talked to her and she told Alexia her story. Alexia found out what things they have in common, like Arielle played violin, Alexia plays French horn. Also, that they both like to study and that the reason they want to become a medical doctor is because both have had family members who are sick most of the time. Arielle told her journey and Alexia listened very attentively.
After lunch, we went to the Medical School Library at Indiana University. Alexia had fun looking at the facilities and she observed medical students studying. She then taught me how to play a video game using the library computer and I realized that Alexia is very good at observing and understanding three dimensional structures. We finished our outing with a tour of the laboratory where I work.”
-Big Sister Nizeet Aguilar