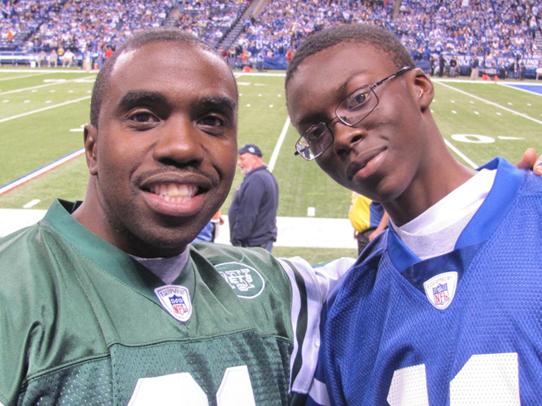 Today’s guest blogger is Alumni Little Brother Alex, who was a polite and shy 14-year-old when he was matched with his Big Brother Eugene Hawkins. The two developed a close friendship, and Alex realized that not only was his Big Brother someone he could have fun and joke around with, but he was also someone he could rely on for support. Eugene was named Big Brother of the year in 2014 for his dedication to Alex, who graduated from Indiana State University in 2018 with a degree in business.

“I was looking for a Big Brother who could do more than just talk to me about my problems. I wanted someone to show me new things and perspectives.  My favorite memories with Eugene include both little and big things. Eugene was always there for me. Eugene saw that I really wanted to learn how to drive a car so he taught me. It was a big moment because not only would I not have my license without Eugene’s support, but he proved that he was someone who would make the time to help me learn something new. I also loved doing community service with Eugene – I learned the importance of volunteering your time to help others.

“Eugene influenced my decision to attend college and he signed my recommendation letter for Omega Psi Phi fraternity. He also introduced me to the National Association of Black Accountants through his involvement with the National Association of Black Engineers. He was very supportive of my involvement on campus throughout my college years and provided the encouragement I needed to keep my grades up.

“Eugene has not only influenced me in my academics, but also in my character. He has helped me make better decisions and think about the ways I can help others. I learned how to be selfless. Eugene taught me that there is always a way to resolve issues and overcome any obstacles that might come up. Not only am I more academically inclined and passionate about learning, I know the importance of staying dedicated.”