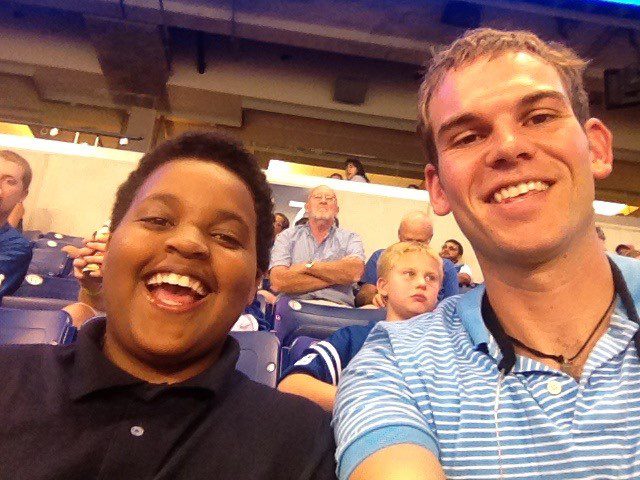 Today’s blog is written written by Big Brother Bobby Grainger. He was matched with his Little Brother Jalen in 2011 and the two will graduate from the program in May. Bobby stopped by the blog to share some thoughts about his match as he reflects on his experience with BBBSCI and his friendship with

“On Saturday, January 12, 2019 I looked at my Facebook Memories and noticed that 8 years ago that very day that I was matched with my Little Brother, Jalen. A lot went through my mind at that very moment, but most of all I thought about what an impact this organization has had on me and from what I know, Jalen and his family.

I made the decision to become a Big Brother near the end of 2010 when I had lived in Indianapolis for about a year and a half and figured I’d be around for a while. I had read somewhere that BBBSCI was the #1 place to volunteer in Indianapolis, so I said to myself, “Go there.” I really didn’t have any other reason to do it, but I knew that I wanted to start volunteering in the community and figured this would be a great place to start.

Fast forward a few months to the beginning of 2011 and I got a call from the agency and they said, “We think we have a match for you.” I was so excited. Jalen and I got to meet shortly after and for the past 8 years, have been together with the program. I still remember that day when Jalen barely stood to my elbow and now he is the same height or even taller than me. I think we were both nervous, but Jalen was (and still is) a little shy. So, I let him wear my sunglasses when we took our picture, so he could look cool (I’m sure he’s embarrassed now when I tell that story). 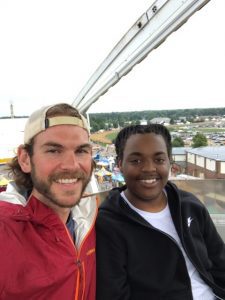 Over the last 8 years, Jalen and I have had some great experiences together. We’ve had fun at the match parties, cooking classes, Pacer games, Colts games, and various other events that BBBSCI has put on to support it’s matches. Some of our most favorite memories though have come in hanging out just the two of us. We often just spend time going to get dinner and talking about what life is happening for both of us at the time. Being matched for 8 years, sometimes you just run out of things to do! For an 18-year-old, I feel like Jalen understands the world a lot better than most his age, but also has a side that questions nearly everything! I really like that about him. Although it has gotten him into trouble from time to time…

Our match has seen its ups and downs. For the entirety of our time together, I have had a job that requires me to travel. Early on, I would be gone for 3 weeks a month and we wouldn’t get to connect as often as I would have liked, or perhaps he would have liked to also (one of my big regrets). However, we did make the most of talking by phone and I was able to keep in contact with him over during those trips. Over time, we have spent less time together, but we both know that we are just on the other end of a text message or phone call. I would say our match is less traditional than most, but in the end, we’ve made it ours and I think that’s what you have to do to stay with this program and we have both grown immensely from our involvement in BBBSCI.

My belief in the BBBSCI program comes from 32 years of having positive male role models in my life. I know that not everyone has the privilege that I did when growing up of having an involved father, two living grandfathers, and a family that sacrificed a lot for myself and my siblings. Having lived in Indianapolis for 10 years now, I can’t speak enough about the positive impact that BBBSCI has on our community, but I also can’t say enough about the need for others to step up and continue to make an impact on the community of youth in this city. 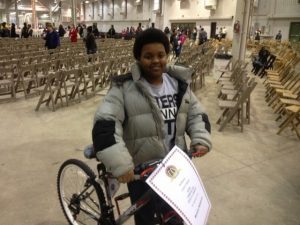 As many of you already know, or have been told, being a part of BBBSCI is life changing. Many times, it is the relationships you form with your Littles and their families that shape your life in a positive way and my story is no different, but with a little twist. It wouldn’t be a blog post in February if you didn’t talk a little about love. Because of our involvement with BBBSCI, my (future) wife and I met when we decided it would be good to get our Littles together. It was really easy because they were biological brother and sister!

Unofficially, our first date was at Monical’s Pizza and a movie with our Littles! From there, as they say, “The rest is history.” For those looking to join the program, I don’t tell you this because BBBSCI is a great way to meet the love of your life, I tell you this because without taking that leap of faith to do anything, you won’t be able to see what’s in store when you land. For me, it resulted in two positive relationships that I wouldn’t change for the world. What kind of an impact do you think something like this can have on you? As our official involvement with BBBSCI comes to an end in May, I know that Jalen and I will have a relationship long beyond the agency check-ins and match anniversary parties.”

During the month of February, YOU can help us match 25 waiting kids with a caring adult mentor. Help us make more matches like Bobby and Jalen’s possible by making a gift at www.BeBigForKids.org/MatchMakers. For more information, including how to maximize the impact of your gift, contact Caitlin Bain, Development Director, at cbain@bbbsci.org or 317-472-3731. 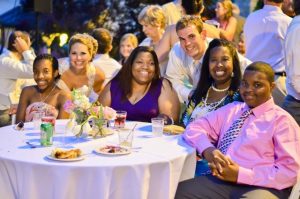 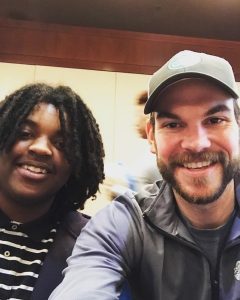