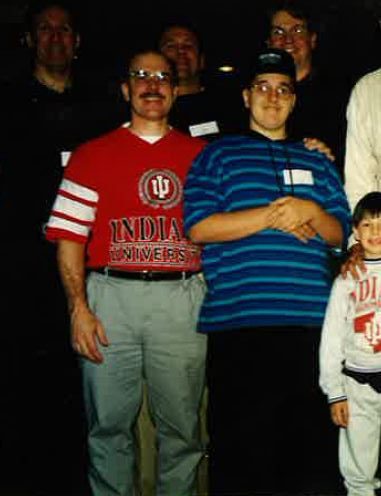 Alumni match Dan Bowden and Jarod Darlington were matched through Big Brothers of Great Indianapolis in 1989. Today, they are still great friends and supporters of the BBBSCI mission. Read more on this life-long friendship in today’s blog!

Dan Bowden got involved in Big Brothers when his company participated in the agency’s annual fundraiser, Bowl for Kids’ Sake. Dan was in his late 30’s and realized it was time to sign up to be a Big Brother. His Little, Jarod, was matched with a different Big Brother a couple years earlier, but the matched ended after a year and a half.

Jarod was skeptical at taking a shot at another Big Brother. The thne Executive Director of Big Brothers, Clay Brewer, assured Jarod he found the perfect match for him. When he asked Dan what he wanted from this program, Dan replied, “I want a friend for life, I think that’s why they matched us.”

Jarod was raised by his mom and his grandmother. His mom thought this program would be a great, and Jarod thought it would be great to have a male role model in his life. Dan and Jarod were matched as Big and Little in 1989 and the rest, as they say, is history!

Dan and his wife involved Jarod in whatever they were doing. They didn’t live too far from each other, and the bond that they built during the match was due to the fact both wanted a lifetime relationship going into it. They have a lot in common, but they’re also very different. They learn things from each other.

Today, Dan and Jarod still participate in BBBSCI’s annual Bowl for Kids’ Sake event. Their team name is always, “Who is the Big?”. The story behind that starts with Jarod growing taller and taller during their match. Once Jarod surpassed Dan in height, Dan got them matching sweatshirts that said, “Who is the Big?”

“I wanted a lifelong friend… and that’s what I got with Jarod!” – Dan

Giving Tuesday is December 3 and you can help BBBSCI create more matches like Dan and Jarod by making a gift at GiveBig.BeBigForKids.org. Stand with BBBSCI to ignite potential in more than 1,400 kids this year.