Our Big Futures program culminates in Celebrate Mentoring, which recognizes graduating matches and celebrates the positive impact of mentoring.

Check back soon for information our 2020 Celebrate Mentoring event!

To view pictures from the 2019 Celebrate Mentoring, click here. 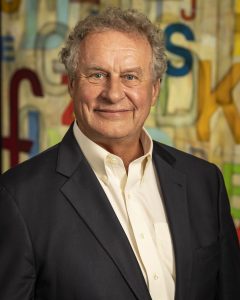 Al Oak is the Chairman and CEO of Cripe, Co-Founder and Chairman of ECO Oxygen Technologies, LLC, and a three-time Big Brother.

Al Oak is Chairman and CEO of Cripe, an architectural and engineering firm based in Indianapolis. He joined Cripe as a land surveyor and since then has served in just about every area of the firm. He has been involved in the design and project management of a number of large-scale, multi-use developments. The firm has won numerous awards as a "best place to work."

Al is also Co-Founder and Chairman of ECO Oxygen Technologies, LLC, which provides environmentally effective solutions to treatment of water and wastewater through superoxygenation of effluent throughout the U.S.

Al has been recognized as a Distinguished Alumnus of the School of Civil Engineering at Purdue University, a recipient of the Legacy Award from the Kelley School's Center for Real Estate Studies, and a Distinguished Hoosier by the Governor of the State of Indiana. Recently, Al was admitted to the Academy of Alumni Fellows, the Kelley School of Business. He and his wife, Shary, are the recipients of the “Spirit of Philanthropy Award” at IUPUI.

Al and his wife Shary reside in Indianapolis. They have one child, Adam, who also works at Cripe and is married to wife, Christen, and there’s a grandson, Miles!

Big Brothers Big Sisters of Central Indiana is honored to recognize Al Oak as the 2019 Community Mentor Award recipient and is grateful for his tremendous service to the youth in our community.