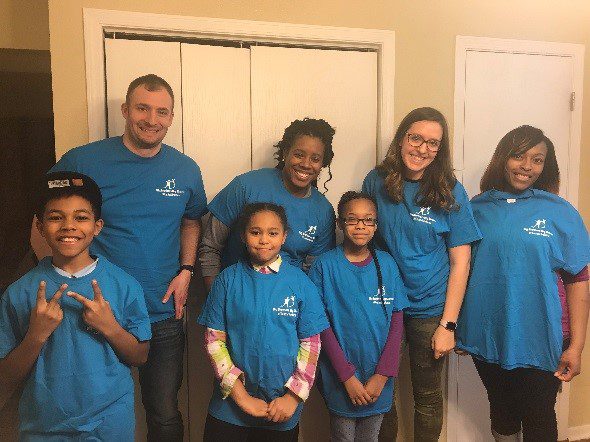 Kristen Berrett, Match Support Specialist (MSS), is our guest blogger for today. A MSS is the full time BBBSCI staff member assigned to a select number of matches. MSS check in regularly with the Big, Little, and the Little’s parent/guardian to make sure the match is doing well and everyone is having fun. They also are present at each of their match’s Match Intro. A Match Intro is when a Big and a Little meet for the first time. They set goals, plan their first outing, and go over program policies. The parent, Little, Big, and MSS all attend the Match Intro, and Kristen gives us some behind the scenes info on what goes on at these special events!

A few weeks ago, I had the fun experience of meeting three siblings – Kierstin, Kaden and Khylan-and introducing them to their new Bigs – Nicole, Nick and Jasmin – all on the same night!  The meeting where Littles meet their Bigs for the first time is called a Match Intro. The Match Intro always includes the Little, the Big, the Parent, and the Match Support Specialist (that’s me!) This one was extra special because Kierstin, Kaden and Khylan got to meet their Bigs all at the same time.

I got to the siblings’ house a little early to meet them and their Mom, Raven. Kierstin, Kaden and Khylan were so excited for their Bigs to arrive. After I talked with them for a few minutes, I went back outside to wait for the Bigs. While I was waiting on the porch, I looked back at the house, and I could see three cute little faces peeking out of the front window.  Kierstin, Kaden and Khylan couldn’t wait to get the first glimpse of their Bigs as they drove up!

When Nicole, Nick and Jasmin arrived, we went inside the house and everyone sat around the kitchen table. Raven had to bring in extra chairs because there were so many of us! We went around the table and everyone shared one unique or special thing about themselves. We learned some cool facts, like Khylan’s nickname is “Mousey” because she loves cheese, and both Kaden and Nick love to play football.  Another thing I loved hearing about was the different jobs that the Bigs have – Nicole is a teacher, Nick is a manager at a construction engineering company and a sports referee, and Jasmin is a pharmacist.

After the introductions, I talked to the group about the Big Brothers Big Sisters safety policies and guidelines. Then it was time to set some goals. Kierstin and Nicole, Kaden and Nick, and Khylan and Jasmin spread out throughout the kitchen and living room, and each new match talked about what they want to accomplish together during the first year of their match. When we came back together around the kitchen table, the most complicated part of the meeting began – all three of the new matches got to schedule their first outing together.  Raven, the Mom, got out her calendar and did a great job keeping up with all the scheduling, ? It is vital for the parent to be involved with the match, right from the very beginning! Nicole, Nick and Jasmin will schedule all the match activities with Raven, and the kids will talk with Raven after all their activities with their Bigs to tell her how it went.

We finished the night off by taking some pictures. Each of the kids got to take an individual picture with their new Big, and then we did a few group pictures. Kierstin, Kaden and Khylan come from a big family (they have a younger sister and a foster sister as well!), and Raven hopes the Bigs will help give her kids personal attention, encouragement and motivation. You can tell from the pictures that everyone left the Match Intro smiling and excited for this new adventure!