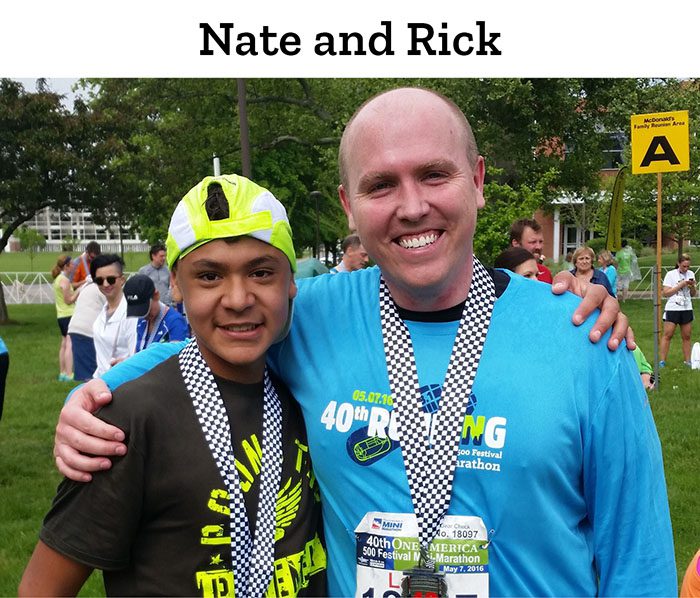 Little Brother Nate and Big Brother Rick have been matched together for almost 9 years and have spent countless hours together building their bond as brothers. Nate was inspired to attend high school at Bishop Chatard after learning that Rick attended that high school himself. Nate is an exceptional student and plans to attend Anderson University in the fall to study Marketing through their School of Business. Nate will also play football for Anderson University.

Nate’s mother, Christine, shared that Rick and Nate hit it off early on in their relationship and insists it’s likely that the pair has never had an awkward conversation or a weird silence between them. From their very first outing enjoying an Indians baseball game to running the Mini Marathon together a few years ago, the pair has enjoyed many memories. Christine expressed that what has stood out the most is Rick’s commitment to Nate over all these years. Rick has lived up to and beyond every expectation Nate and Christine had about having a Big Brother through our program. Christine wanted to say thank you to Rick and to Big Brothers Big Sisters and let others know that this has been a great opportunity for her son.

Little Brother Nate had this share when asked about the impact Rick has had on him. “First, I want to say thank you to Rick for being a major role model in my life. I wouldn’t be where I am now in life, even the school I attend, if I hadn’t had met Rick. To Rick: sorry we never swam with the dolphins (inside joke), but every time we did get together, it was truly a blast.”

When reflecting on his time with Nate, Big Brother Rick said, “When I first met him I remember putting my arm around him for a picture – he was WAY smaller than me! Now, he is a full grown man and still growing – it would look like a complete opposite picture of what we mimicked that day. One thing that always blew me away was Nate’s politeness from an early age – please, thank you, and always looking people in the eyes – he was a gentleman from the get go.”

“Nate helped me prepare to become a dad – when I first met Nate, I was fairly recently married but no children. I now have three boys (7, 4, 2) and I know for a fact my relationship with Nate prepared me for fatherhood – and continues to prepare me for my boys getting older!

“I am so proud of Nate and the man he is and is becoming. If my boys grow up like Nate has, I would be nothing but ecstatic at the men they have become! I appreciate all he is and cannot wait to continue to see what plans God has laid out for him!”

We  have no doubt that Nate and Rick will be lifelong friends and we can’t wait to see what continues to unfold in Nate’s future!

Best of luck at Anderson University, Nate! BBBSCI will be cheering you on along with Rick!