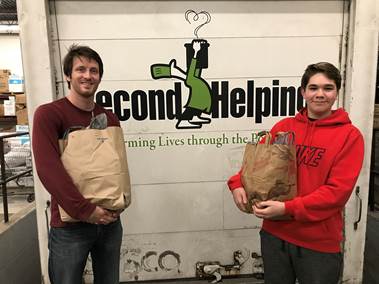 Steve and Ayden donate to Second Helpings
Little Brother Ayden and Big Brother Steve Harton have been matched since the Fall of 2016. Ayden and Steve both love movies and have formed a strong bond seeing and then discussing them. After the movies, they’ll go back to Ayden’s and have dinner with his family, with Grandma Diane always insisting that Steve take home leftovers.
Ayden and Steve decided they wanted to do something centered around food and thought that Second Helpings would be a good organization to donate non-perishable foods to. Ayden is a freshman in high school and like a lot of youth, isn’t the biggest fan of his Algebra class. Steve was able to incorporate some real world math by setting a budget (tweaking the $20 Grocery Budget activity that’s listed in the Big App to fit their needs) when they went shopping and then letting Ayden figure out how to maximize their impact. They ended up with several pounds of macaroni, rice and lots of spices. Last week they delivered the food to Second Helpings and got to take a tour of the facility. Both Ayden and Steve have talked excitedly about the experience and it has helped them connect in a new way. Don’t worry – they’ve still managed to see some movies, play video games together, and Steve still rarely leaves the house empty handed or hungry.